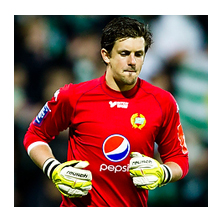 Celtic are said to be tracking the highly-rated Hammarby goalkeeper, Johannes Hopf.

Sources within Swedish football have revealed scouts from the SPL club have watched Hopf on numerous ocassions in recent months with Celtic’s director of football development, John Park receiving regular updates on his progress.

Fraser Forster is the current first choice at Celtic Park, but with his second loan spell at the club coming to an end at the culmination of the season and Newcastle likely to demand a large fee to make the move permanent, the Glasgow club are likely to be in the market for a less costly alternative. Neil Lennon has turned to Łukasz Załuska for brief periods in the past, but despite backing the Pole publically, it’s thought the Celtic boss would prefer a more reliable option in the longer term.

Hammarby endured a difficult season in the 2nd tier of Swedish football, but Hopf emerged with immense credit following a string of impressive displays. With the strikeforce failing to fire at one end, he produced several top quality saves in the run-in which earned his team crucial points in helping avoid relegation and the division’s relegation play-off. Despite his youth, the 24 year old Swede has a good deal of first team experience under his belt and usurped former Arsenal goalkeeper Rami Shaaban as first choice for the Stockholm club in 2010, going on to be voted the club’s Player of the Season for that year.

Hopf was the subject of a failed transfer bid from an unamed Barclay’s Premier League club during the summer transfer window. On that ocassion his club rejected a bid thought to be in the region of £300,000, but with the club’s financial situation having deteriorated in recent months, sources inside the club have indicated a bid of between £200,000 to £250,000 may be enough to secure the transfer, most likely in January before the Swedish side commence their preparations for the new season. A very high profile Bundesliga side and one of Serie A’s major powers are also rumoured to be tracking him.

For more on Johannes Hopf check out:
– highlights video
– an analysis of Hopf

Leave a comment to join the debate ... Cancel reply